Mykonos has become a favourite destination of VIPs and celebs, attracting the international jet set for both their summer vacation aboard a yacht or at a luxury villa and for purchasing exclusive holiday properties that follow the lines of traditional Cycladic architecture and feature posh interiors and all modern amenities required for a sumptuous lifestyle and a palatial stay.

If you are planning to visit (or explore) the queen of the Cyclades with a yacht, a careful examination of the nautical map will give you plenty of spots to drop anchor with relative ease. However, the ones most suitable for mooring your vessel on the west coast of Mykonos are:

With a distinct circular shape, the picturesque Old Port is conveniently situated right in front of the town of Mykonos in the heart of the western coast and could be a good place for mooring in calm weathers. It comprises of two jetties that provide sufficient protection from the north and west while the port itself is safe from the southern and north-eastern winds. Note, though, that when strong southwest or north winds blow (wave height inside the port could reach a bit below 2m) the port’s entrance has considerable swell. Also keep in mind when anchoring your yacht that northern winds may raise the sea level by up to 10cm while southern winds may lower the sea level by up to 15cm.

As of July 2017, anchoring is no longer necessary because all berths now have mooring lines, with water and power available too. At the moment, the quayed part at the north of the port, which is the most suitable spot to berth yachts is not accessible for security reasons. The next best place to drop anchor is the southwest jetty of the port (in the two small coves there). Beware, though, because the depths may shallow rapidly. In general, the old port is reserved for tripper boats and should not be your first choice if you have a large vessel, especially when the weather is bad – the new port is a much better option. 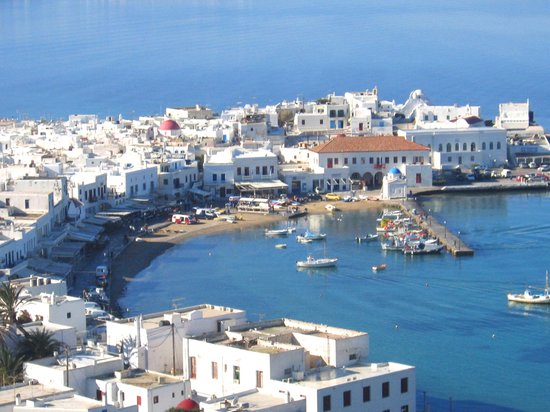 Only a couple of km north of the old port, the New Port can serve cruise ships, vessels of ferry lines, and yachts alike. Head to the north side of the 700-metre quay (northwest to southeast direction), which is basically an enclosed area connected to the coast with a bridge. Other appropriate berthing spots are between the jetties of the southern part of the port. You will find both electricity and water supplies and plenty of tavernas, seaside restaurants, and bars within an arm’s reach. The only thing you should be aware of when manoeuvring is the northern and north-western winds that could challenge you a bit.

Korfos Bay is open to the north and is perfect when southern winds blow. You may anchor there by 4m to 6m on the bottom of seaweed and mud. It provides sufficient protection from the southern, western, and eastern winds.

Best Mykonos Anchorages for Your Yacht on the South Coast